Our vast journey through the rural highland weaving villages of Peru on our Textiles of Peru tour  is only possible because of our collaboration with Threads of Peru. Their long standing relationships with the weavers of these communities creates open doors and generous welcome for our travelers. I strongly believe in the work they are doing and am honored to be able to collaborate with them. I wanted all of you to know more about who they are and what they are  doing. Below is an article with that story. 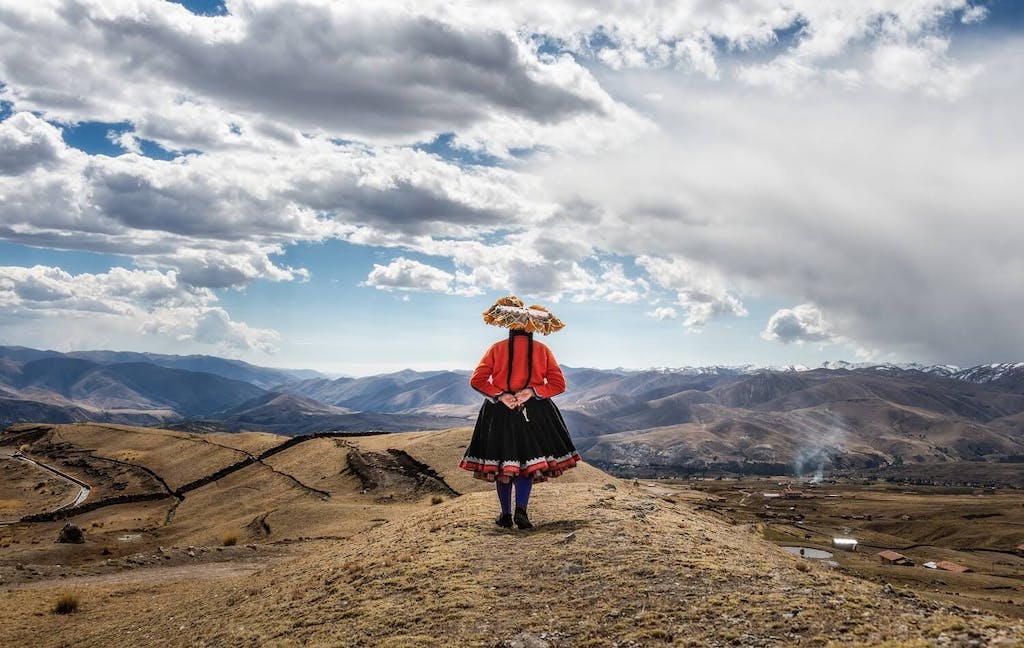 The tradition of weaving in Peru stretches back through 5,000 years of history, from the coastal cities of Paracas and Nazca to the high Andean communities of Cusco and Ayacucho. Backstrap loom weaving has always been an incredibly important part of Peruvian culture, and continues to be integral to Andean identity today, as much as alpaca herding and the native Quechua language.

Like so many traditional cultures the world over, however, Andean communities in Peru face the dual pressures of cultural degradation and lack of economic opportunities. Threads of Peru was founded to alleviate poverty and revitalize cultural traditions in rural indigenous communities around Cusco in the Southern Andes of Peru. Their business model brings needed income to rural families without diminishing the fabric of the traditional Andean lifestyle, breathing new life into this centuries-old culture.

One of Threads of Peru’s key objectives is to promote the centuries-old Andean weaving tradition, preserving the continuity of cultural ties between past and present and valuing the rich layers of meaning encoded in every textile. Drawing on the knowledge passed from generation to generation, the weavers apply their skill and creativity to create unique pieces that are not only gorgeous to wear but also have a personal story to tell. 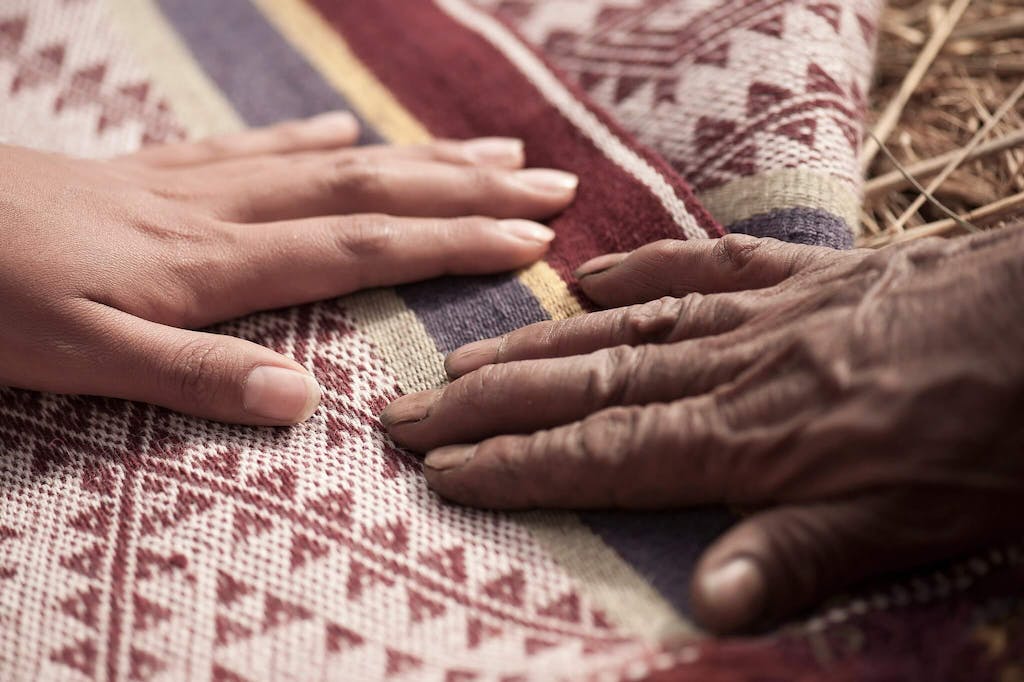 Items produced by Threads of Peru represent the work and the heritage of over 120 artisans in seven communities and four regions of Cusco. Each region has its own distinct textile traditions, colours, symbols and techniques. Everything is made by hand using traditional weaving and spinning techniques that date back thousands of years to pre-Incan cultures. 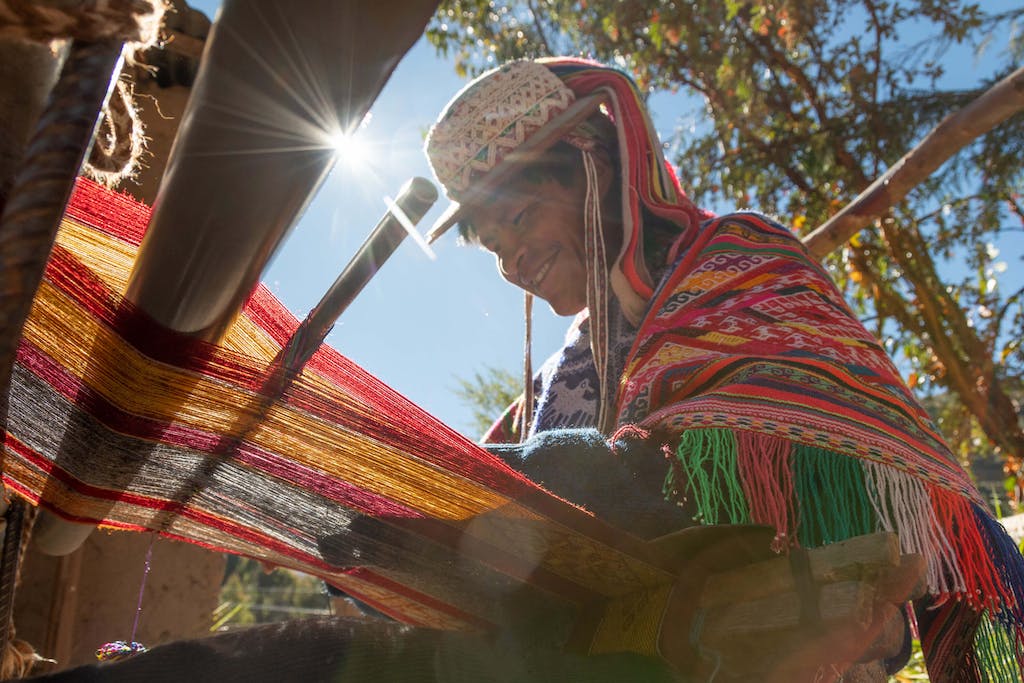 Read on if you want to learn more about each of the villages that works with Threads of Peru. We visit all of them on our Textiles of Peru journey. It is another world out there.

Upis is well-known for breathtaking trekking routes, impeccable artisanship, and free-ranging alpaca herds. Typical of most rural Andean communities, Upis is characterized by an extreme climate, very basic living conditions, and limited economic opportunities. It is situated quite literally at the foot of the great Ausangate mountain, the highest mountain in Southern Peru, and an important apu (mountain deity) in Quechua culture. 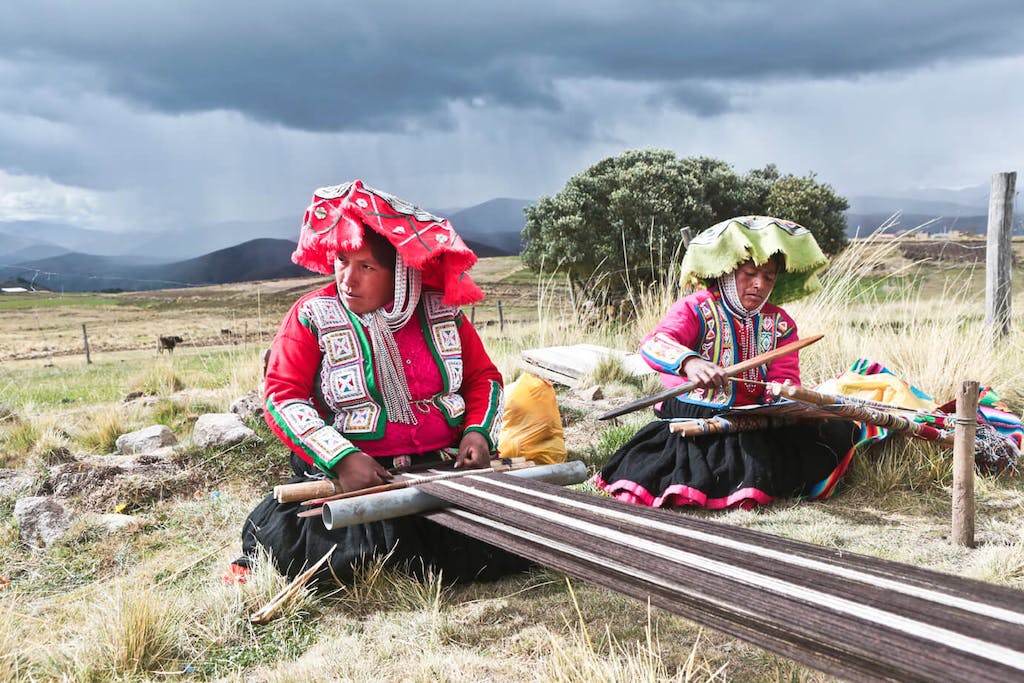 Here, Threads of Peru works with the Saya Ccocha weaving association. The Saya Ccocha weavers have been invaluable members of the Threads of Peru team since 2012. Saya Ccocha (formerly called “Awaq Mayki,” meaning handwoven in Quechua), boasts over 20 talented and motivated members. They use yarn hand-spun from their own herds of alpaca to make a series of beautiful pillows, rugs and scarves, among other items.

In Chaullacocha, Threads of Peru works with Ticllay Warmi. Because of their remoteness, the relationship between Threads of Peru and Ticllay Warmi that began in 2009 is the only sustainable source of income that the women have for their textiles. The Ticllay Warmi weaving cooperative is formed by 26 Quechua women. They mainly work with alpaca and their weavings – mainly ponchos and blankets – are typical of the Ollantaytambo region. 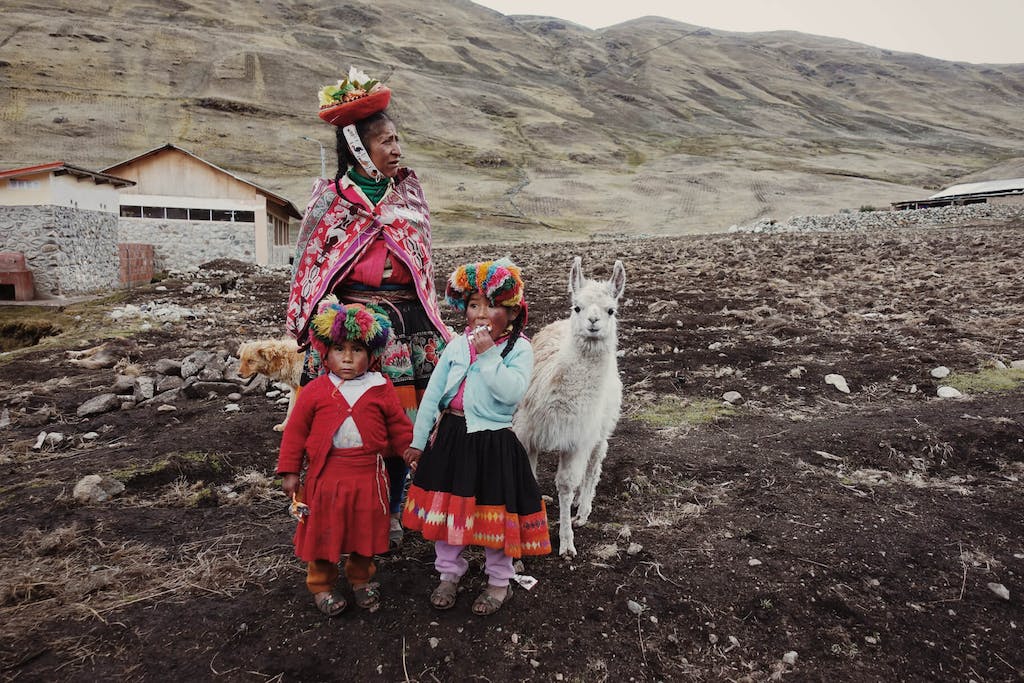 Rumira Sondormayo is located across the river from its bigger and better known neighbour Patacancha, about an hour’s drive up the mountain from the town of Ollantaytambo. At an approximate altitude of 4000 meters (13 000 feet), Rumira is the home of the Puca Turpay weaving cooperative, composed of 20 women.

Rumira is accessible by road, and has electricity in the houses in the main town centre, access to both primary and secondary schools as well as the medical post in Patacancha. Despite significantly better access to public services and traffic tourism, the small, adobe brick buildings, gentle stream, and lush groves of eucalyptus trees have kept the picturesque Andean landscape intact. Approximately 40 families reside in Rumira Sondormayo, agriculture and herding being their main economic activities. 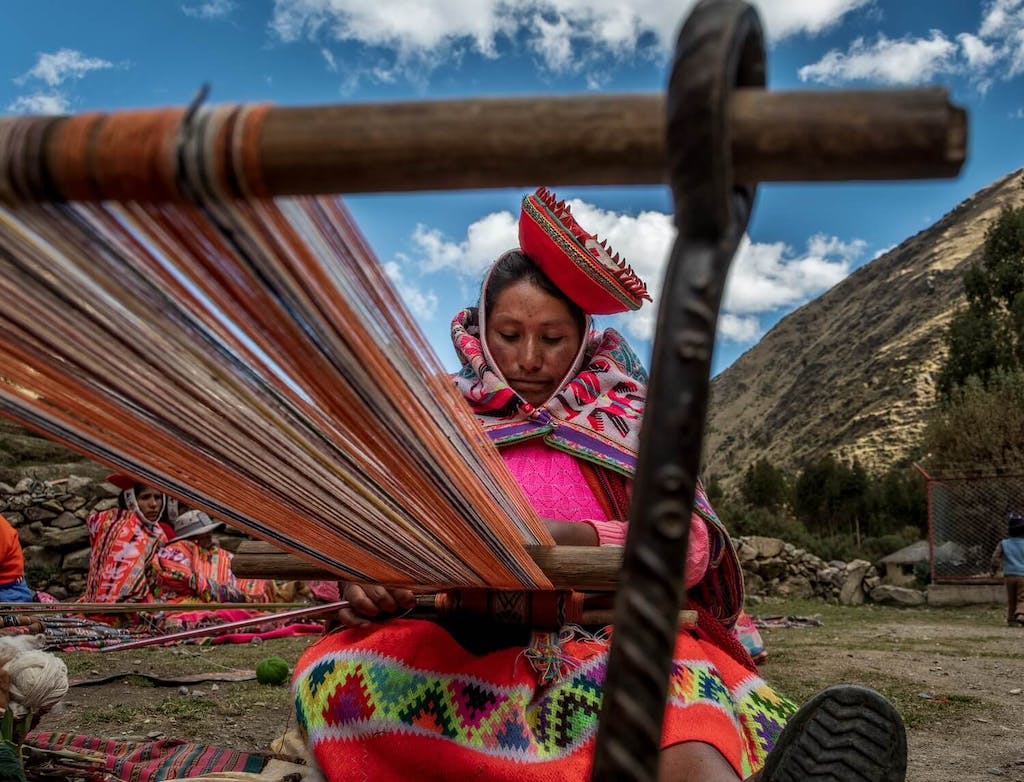 Situated in the heart of the Sacred Valley, Huaran is actually a conglomerate of 5 small municipalities. The weavers who belong to the weaving association in Huaran, Munay Urpi, come from all over the area, some as much as a 2h walk away. There is no real town centre, but the area is much more urban in feel than the other communities. 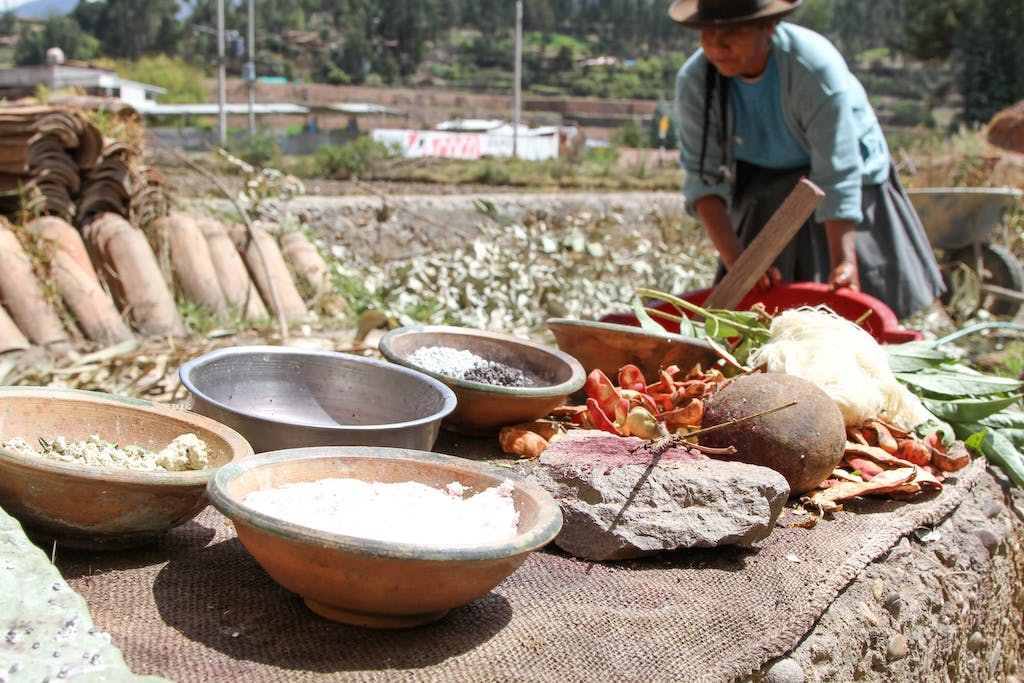 Munay Urpi (‘beautiful dove’ in Quechua) has 10 members. Typically, they meet at the weaving President’s house, which is a humble farmhouse between the highway and the Vilcanota river. The area is full of natural dyes, from the ch’illca plant to cochineal, the tara and molle trees, and more.

The Munay Urpi weavers mainly work with wool, but also some alpaca fibre if supplied to them. Their weavings are typical of the Calca/Lares region of the Sacred Valley. The Huaran weavers are innovators and very creative, and they like trying new techniques and new designs.

Threads of Peru has been working since the beginning with Master Weaver and Dyer Daniel Sonqo from the community of Parobamba. Parobamba is located in the “eyebrows of the jungle,” overlooking the Mapacho Valley. The Mapacho Valley is unique in Cusco due to its location on the edge of Manu National Park, a tropical nature reserve. Several communities can be seen perched on the mountain peaks that encircle the valley below.

Daniel’s guidance and instruction has been invaluable to the professional growth of the weavers that we work with. Daniel, his wife Leonarda, and all 4 of his sons get involved in the textile production, from spinning and warping to weaving. Together they produce some of the finest baby alpaca products Threads of Peru carries, including scarves, ponchos and bedspreads. 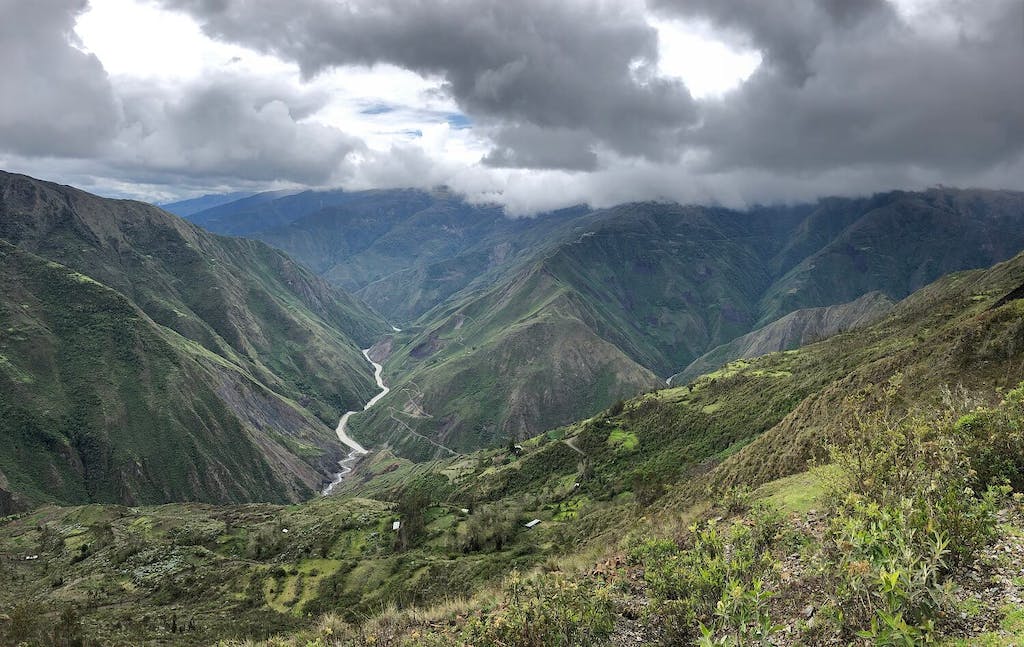 The smallest group of the Threads of Peru team, the majority of the Pallay Awaq members are brothers, sisters, and spouses, having worked together as a formally registered association since 2006. Though a few now live in the nearby, quaint town of Calca in the Sacred Valley of Cusco in order for their children to attend high school, many reside in the high Andean community of Totora, located about 40 minutes above Calca by vehicle.

With the difficulty of finding sustainable sales outlets for their textiles, families in Totora primarily work in agriculture and herding, the community boasting abundant alpaca herds. After joining Threads of Peru in 2012, however, the unparalleled skill of the Pallay Awaq members – their spinning is as fine as machine spun yarn and their mastery of weaving with baby alpaca fiber is truly awe-inspiring – is achieving the financial recompense needed to provide a more comfortable living for them and their and growing families. 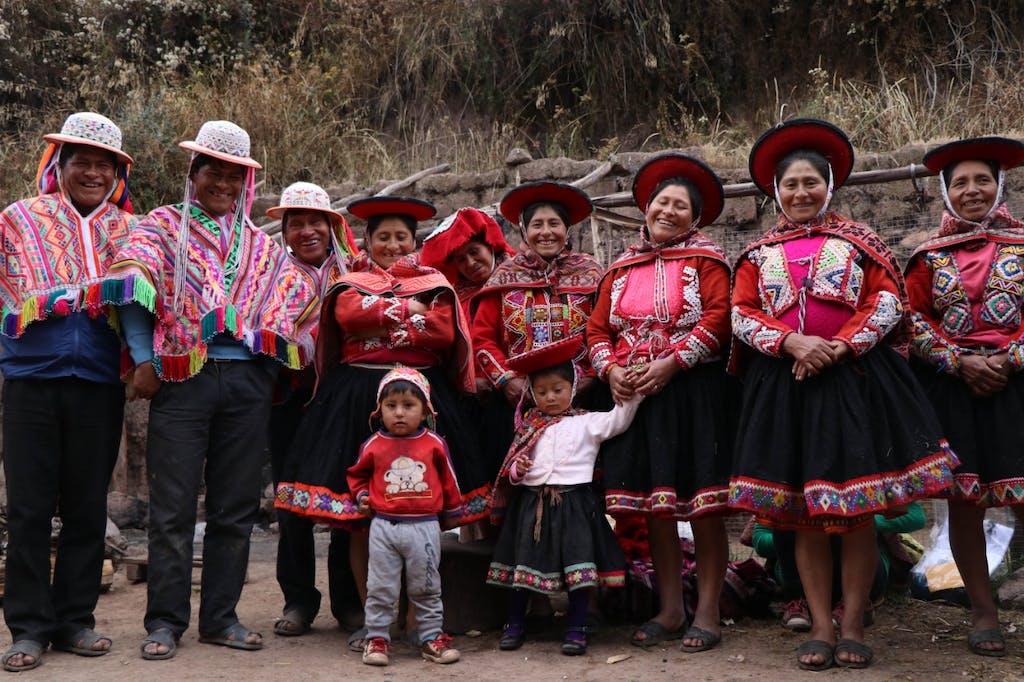 Stone houses dot the hillsides, and alpaca graze freely in this stunning community. Nestled in a valley in the Mapacho Valley region, Pitukiska is one of the most remote communities that Threads of Peru works with. Although the road was extended to Pitukiska a few years ago, the only traffic is a local fruit truck that comes once a week. In order to travel from the community to the nearest town (Amparaes) or beyond, the most common form of transportation is on foot.

The weaving association in Pitukiska is known as Mayu Ch’aska (“river star” in Quechua). The name refers both to the life-giving river that flows through the remote community of Pitukiska, and also to the “river of stars” above, the Milky Way. Pitukiska textiles, similar to those from Parobamba, reflect the tropical vibe of the valley below, full of intricate woven designs and bright colours. Members of the Mayu Ch’aska association produce some of the most traditional items that Threads of Peru carries, and also oversee most of their work with natural dyes. 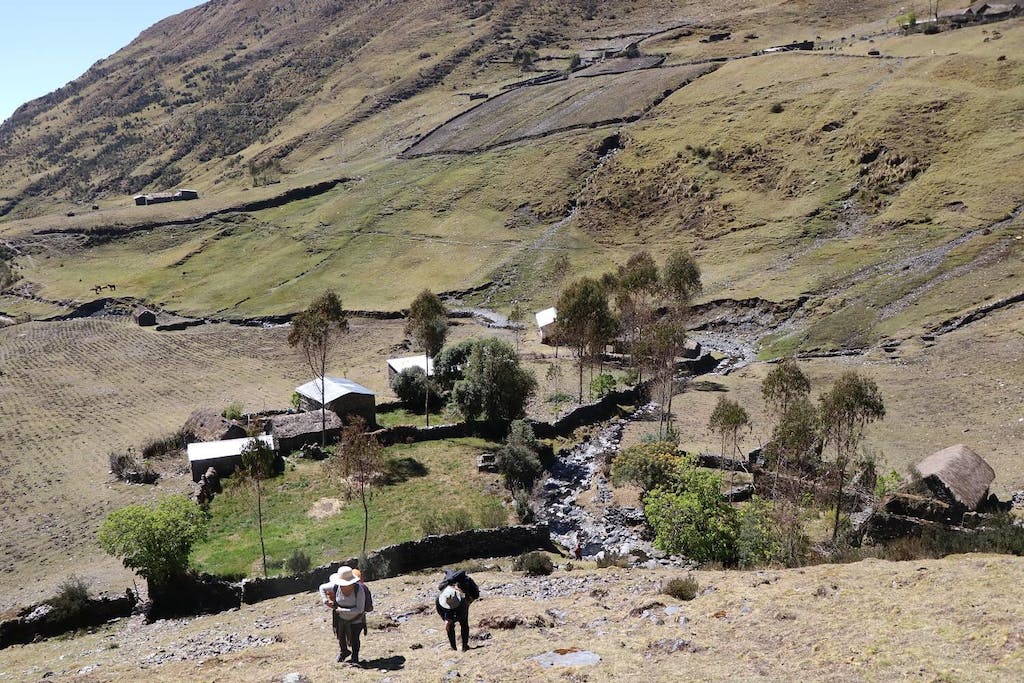