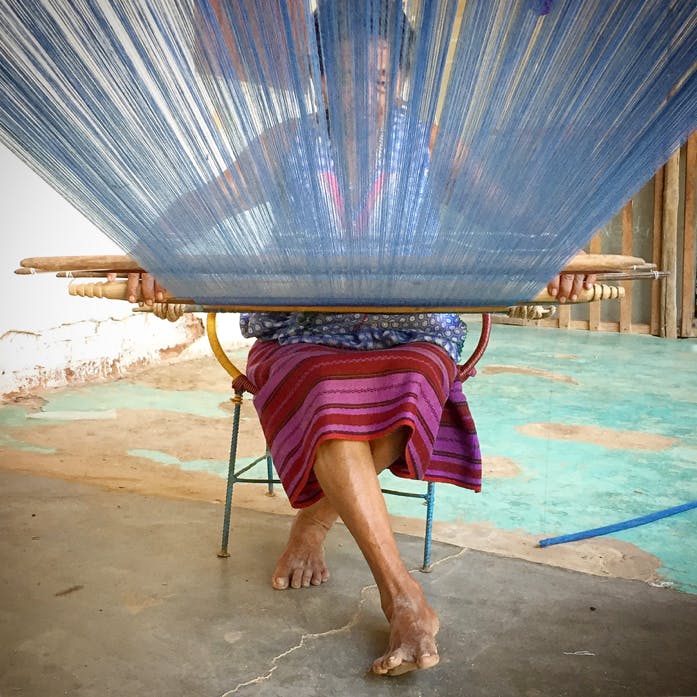 Gone are the days when hundreds of Mixtec men scrambled over the rocky Oaxacan shoreline north of Huatulco to extract the milky liquid from the purpura patula, a marine mollusk. But thankfully to the persistence of a few people, the tradition of shellfish dyeing has survived, for these large mollusks yield the essential rich purple dye, hand woven into the traditional pozahuanco (wrapped skirt) worn by Mixtec women.

It’s hard to imagine how many more years, Habacuc Avendano, the head of the Cooperativa de Tintoreros de Pinotepa Don Luis, will still be one of the remaining thirteen men who are experts at milking the glands of the purpura. He was 15 years old when he started, and he’s 73 now. I briefly introduced you to him a few weeks ago and promised you more. This “more” is the foremost reason for taking this trip, “The Last Shell Fish Dyers, Endangered Silk, The Finest Backstrap” run by Traditions Mexico.

Hidden in Coastal Crevices
We picked up Habacuc at a stop along the road to Huatulco and turned off the main road onto a gravel one heading down to the beach. His stories of the old days of shellfish dyeing began —how they used to walk eight days from Pinotepa and stay on the coast for about three months during the harvesting season of November to February (give-or-take a month). In those days, anyone could come to the coast and dye. But from his village, the men would carry a couple hundred skeins of commercially-spun fine cotton yarn, dyeing three-four skeins per day. After the season, they would walk back home.

Threat and Sustainability
This dyeing tradition came under threat in Oaxaca during the early 1980s when a Japanese company, Imperial Purple Inc., overharvested them. Instead of allowing the mollusks to recover, they collected dye year round. Within four years, the population was severely depleted. Led by anthropologist Marta Turok and the Pinotepa shell dyers, the Mexican authorities were petitioned to protect the purpura habitat. Since 1988, only licensed Mixtec dyers are permitted to harvest dye, taking monthly turns according to the moon cycle, thus creating a healthy environment for the shellfish. The men of Pinotepa de Don Luis continue this practice, trading or selling the dyed cotton to their village women weavers.

Dyeing Process
Unlike the murex mollusk which is known for its imperial purple dye and is killed in the process of obtaining the ink, the purpura have always been milked alive and left to replenish their dye fluid for harvesting at another time. The purpura shell fishermen need to be in the right spot when the tide is low to search the dark crevices for the grey-shelled snail. Sometimes there are two low tides during the light of day and they are able to search more.

Carrying a skein in one hand and a long-pointed stick in the other, Habacuc pries the snail loose. He knows just how and where to squeeze the snail to irritate it, causing the release of the milky-colored liquid and filling the mouth of the shell. Once this liquid is exposed to air and sun, it starts to oxidize to yellowish-green and must be quickly applied directly onto the yarn. Once the liquid is applied, the purpura is placed back into its crevice to recover. This process is repeated, moving from shell to shell until his skein is saturated with dye. From here, the skein is opened up on a rock, exposed to full sunlight, and left to oxidize turning from shades of green to turquoise to purple. In this way, it’s similar to the non-toxic and permanent indigo dye which also changes color when exposed to sun and air. Watch this video of Habacuc and this process on our visit that day.

Yarn and Weaving
It wasn’t easy convincing Habacuc to sell us the cotton skein dyed that day, especially knowing it takes about four skeins to weave a luxurious pozahuanco. My partner Suzanne carried it with her—the stench so strong that even after washing it a few times in her hotel room, she had to triple-bag it. And she still worried about getting it past the dog sniffers in customs. After arriving home and giving it a number of washings, the odor disappeared but the color remained as strong as ever. As you can see, the uneven color application gives a striated effect to the final yarn.