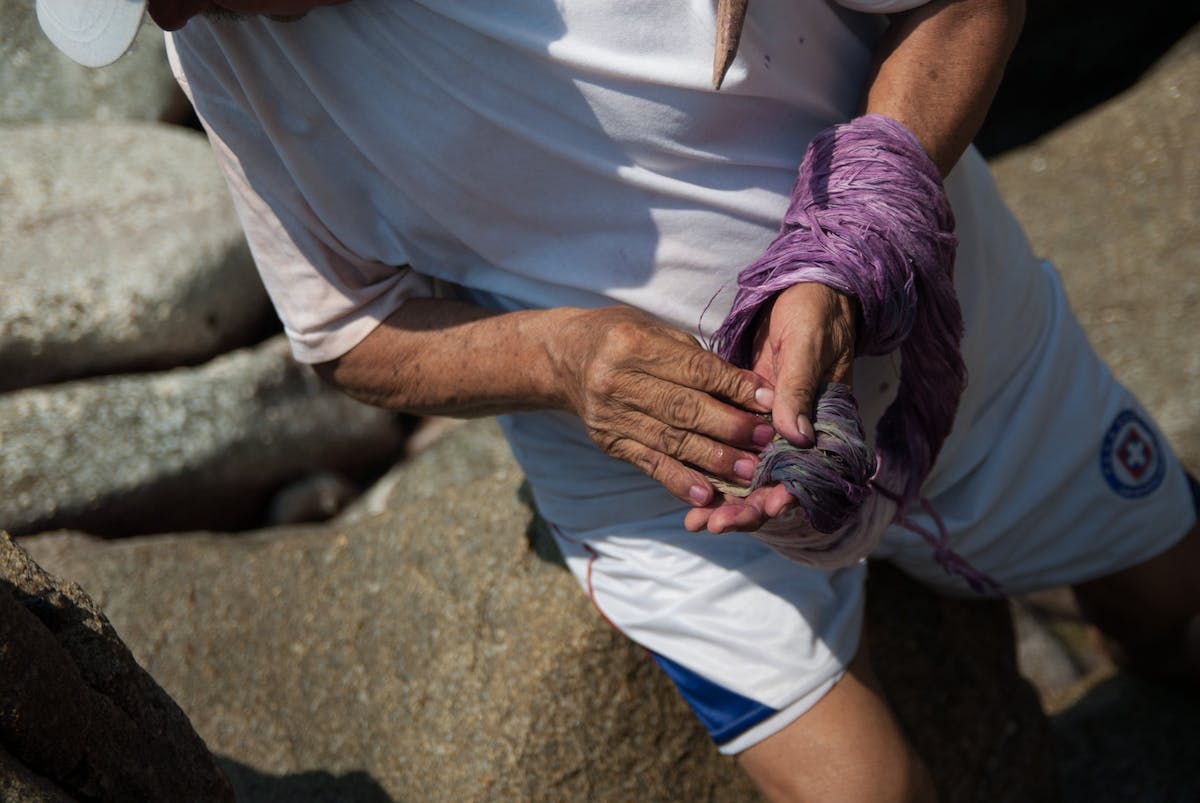 Men with purple fingernails are not such a common site along the remote coasts of Mexico. Yet for a thousand years or so there has been an elite crew of such men working their way along the rocky shorelines of Mexico and Central America. These were the men on the front row of one of nature’s most rare, exotic and coveted colors: purple. They were the shell dyers, the “milkers” of Purpura pansa, a mollusk cousin to the better known Mediterranean murex, that source of royal purple so coveted that murex was driven to the brink of extinction.

Once upon a time these men of purple nails could be found working from north of Acapulco to the southern reaches of Ecuador, with the Gulf of Nicoya in Nicaragua being the center of a network of trade in purple threads (Turok, et al. 1988). Their cotton threads were woven into the delicious diversity of clothing worn in indigenous Mesoamerica before the Spanish conquest of 1521. Bundles of skeins that would never lose the briny smell of the ocean were carried on porters’ backs as tribute payment to Aztec and Incan kings. As in medieval Europe, purple was rare, highly valued and coveted. And for the dyers, milking Purpura meant stained fingernails that would hold their color for weeks after a harvesting.

Times have changed. With the Spanish conquest everything began to collapse. The reverberation of the first musket blast and European flu-laden sneeze almost five hundred years ago is still echoing through the Americas.  And there have been many other factors, industrial advances, globalism, etc. that have eroded  the old ways and erased much of the delicious diversity that once existed here in so many forms. There are no longer shell dyers working from north of Acapulco to southern Ecuador, their threads are no longer offered as tribute to rich kings and the maroon of shellfish ink no longer adorns the woven clothes of a myriad of indigenous nations.

Yet along a remote stretch of the coast of Oaxaca there can still be found a handful of men with purple fingernails.  Here, in the village of Pinotepa de Don Luis, amazingly, astoundingly, sixteen men continue to dye thread with Purpura panza. In this small Mixtec village on the edge of Mexico shell dyeing continues as part of an unbroken, ancestral trade, and the purple threads continue to be woven into the clothing that is the identity of this village. It is the last place on the planet where this is true.

Oddly,  there are no shellfish to be found anywhere near Pinotepa de Don Luis.  Habacuc Avendano, who has been dyeing with Purpura since he was 15 in 1956 explained how he used to walk eight days to get to the rocky coastline that is the habitat of the shellfish. He and the other dyers would travel carrying bundles filled with skeins of cotton, tortillas, dried beans, coffee and sugar. On arriving they would set up camp and stay for three months. The sea provided all their additional food as well as an abundant harvest of Purpura for their cotton. 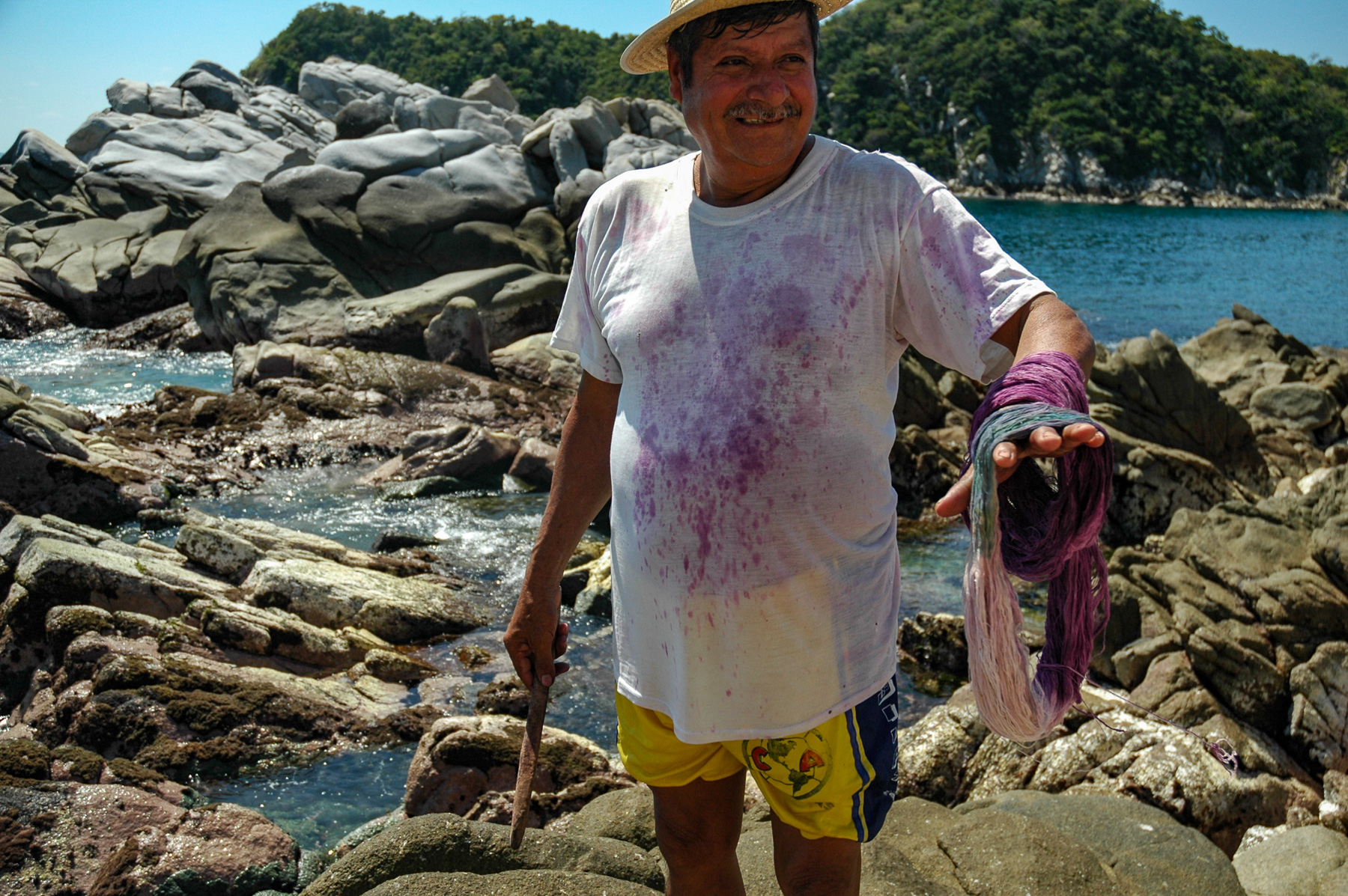 With the paved highway built in the 1980’s, a five hour bus ride now gets them where they need to be. But the process is the same as it was fifty or five hundred years ago. During the three hour window of low tide each day the dyers scramble over the rocks on sure feet, finding the shellfish in crevices and cracks.  With one cautious eye on the pounding surf, they use a short stick made of mangrove wood to pluck Purpura off its perch and then gently press its foot with their thumb. This irritation causes Purpura to release its ink, which is actually a neurotoxin that paralyzes the nervous system of marine invertebrates and is used by the shellfish both for protection and to immobilize its prey.  Apparently human thumbs and fingernails are immune to it. 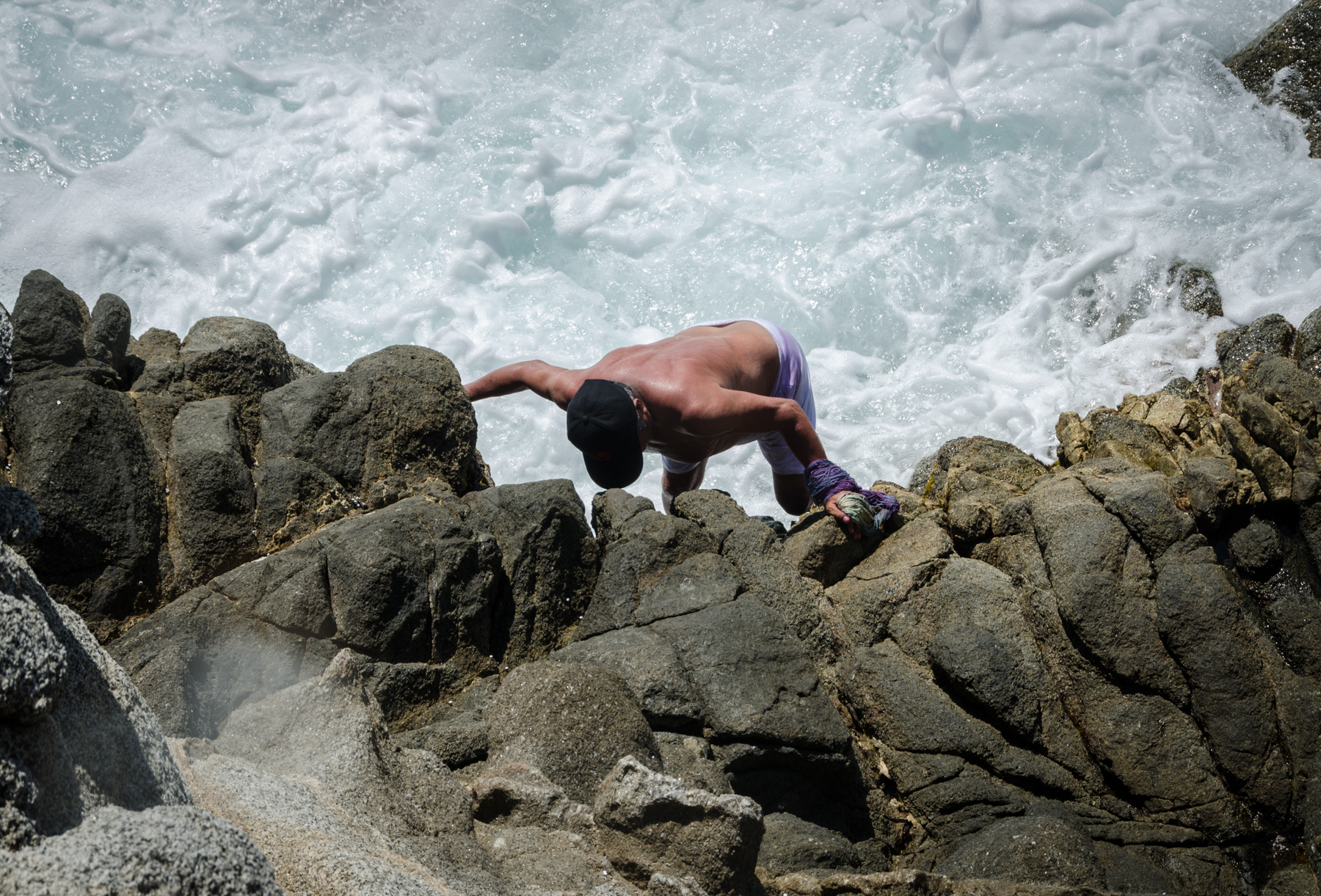 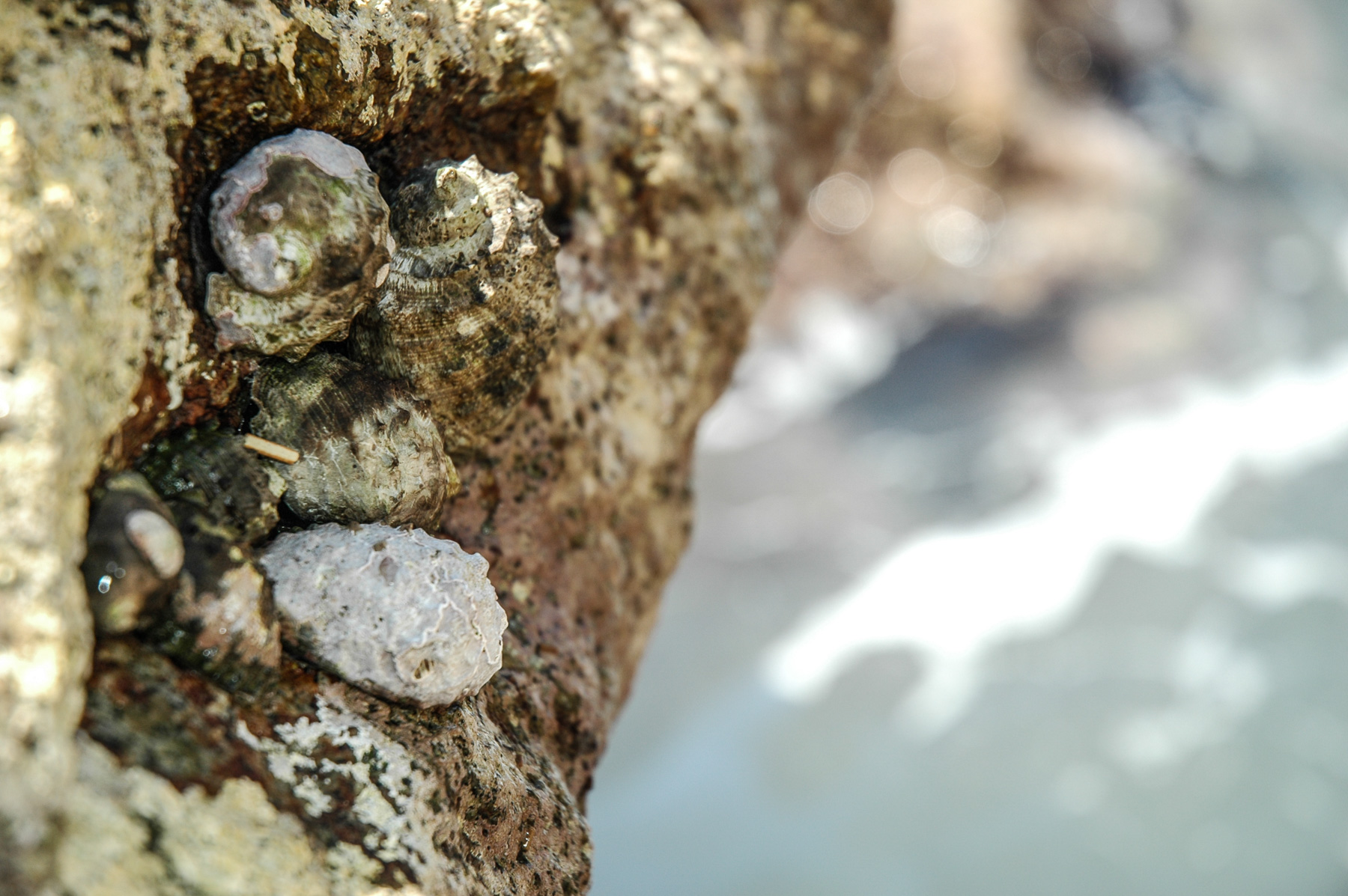 Each shellfish has perhaps a thimble full of this milky white substance. The dyer, with a skein wrapped around his wrist, dabs this liquid onto the threads and then carefully places the shellfish back on the rock in a shady crevice where it will readhere and go back to its daily shellfish life. It will also begin to regenerate its ink, and one moon cycle later it will be fully recharged, ready to immobilize prey or be milked again by a dyer. 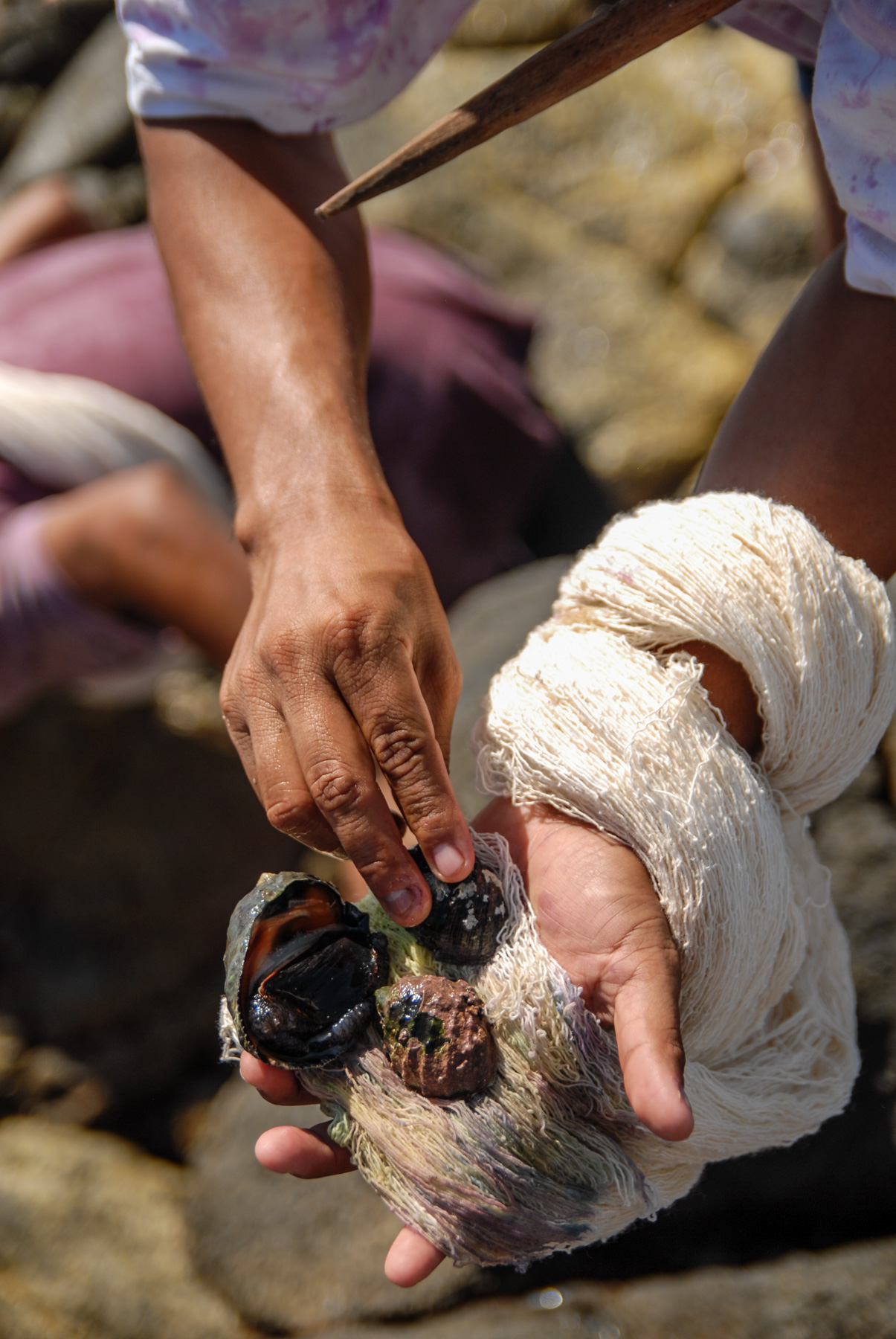 In the meantime the dyer continues to work his way along the rocks, plucking shellfish, squeezing their foot and dabbing the ink onto his skein.  Having plucked perhaps 400 shells, his skein will be fully moistened and completed. As he’s working a curious process takes place with that ink; exposed to air and sunlight it goes through a transformation from clear, to yellow, turquoise and finally to the color purple, where it stabilizes.  The cotton does not need to be mordented nor fixed. The dye simply adheres and sticks. The only additional processing needed is washing the skein to remove the saltwater. The briny smell of the dye itself, however, can never be removed. With time it becomes subtle, yet one can always test a shell dyed cloth for authenticity by rubbing the threads to warm them up and release the odor. If it smells like a fishy ocean it is the real thing!

As the tide begins to rise and the shellfish are covered by the sea again the dyer heads back to his camp on the beach and calls it a day.  Thirty years ago he would likely have had three completed skeins to show for his day’s work. But these days he is lucky to have completed even half a skein, for the quantity of Purpura along the Oaxacan coast has dramatically declined since the mid-80’s.

Traditional dyeing, which does not injure Purpura, was not the cause of this decline; rather it began in the early 80’s when a Japanese company called Imperial Purple Inc. began working the coastlines of Oaxaca. They hired local fishermen to harvest vast quantities of Purpura which they used to dye silk that was used in high-end textiles. Unlike the Mixtec dyers with their deep seated knowledge and respect for the source of their purple, the fishermen knew nothing of managing Purpura pansa and simply threw the shellfish into the sea after milking them…or ate them. In 1988, as a result of the enormous decline in the shellfish and tremendous efforts spearheaded my the Mexican anthropologist, Marta Turok, Purpura was legally protected and Imperial Purple was sent packing.

However, in this same time period the population of this remote coastline began to mushroom as a result of a paved highway and a large new resort area called Huatulco.  Because Purpura is also edible, it has continued to be harvested by a growing population of locals and the shellfish population has yet to recover. Scarcity has considerably raised the cost of production and the price of a skein of shell-dyed thread has skyrocketed since the late 80’s.

Yet the dyers are hanging in there. And what ultimately happens to their threads? They take them back to Pinotepa de Don Luis where most of the village women weave on backstrap looms. The purple thread is sold to certain weavers who still make pozahuancos, the sarong-like skirt traditionally worn by Mixtec women of this region. This amazing skirt is composed of three repeating bands of color; an indigo blue stripe of cotton, a magenta red stripe of hand spun silk and a purple stripe derived from Purpura pansa. These threads of regal sources have become rarer and an authentic pozahuanco is now only affordable to the most wealthy Mixtec women. 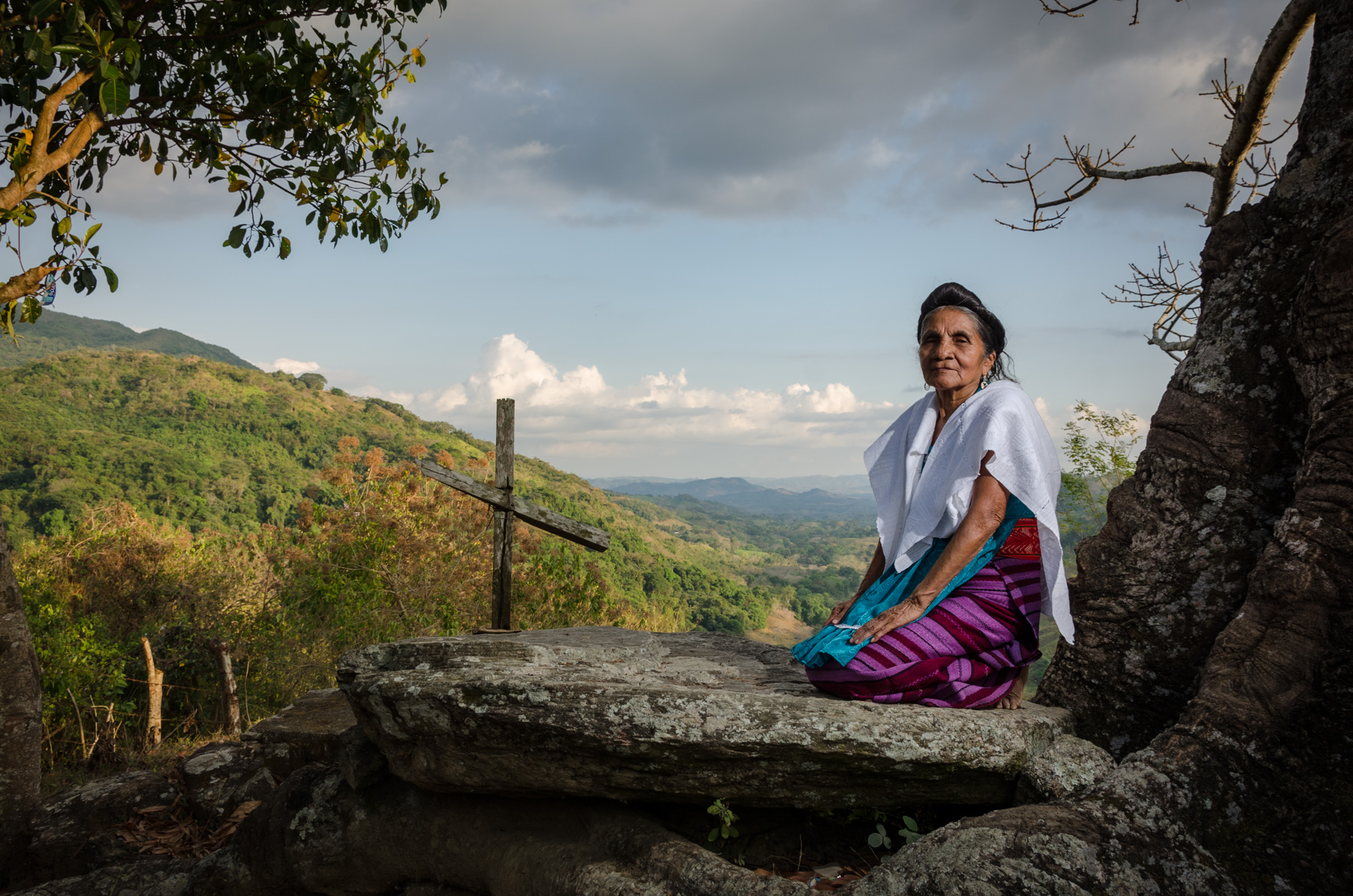 On the coast of Mexico shell dyeing has persisted for untold centuries.  It continues for two basic reasons: The nether-regions of the coast of Oaxaca have been isolated until very recently, protecting traditional cultures from the tidal wave of modern influences, and Purpura pansa is not harmed in the extraction of its ink. A culture and a source of one of its essential natural resources are both intact. There are tremendous challenges facing the last sixteen dyers and the artisans who still weave this purple thread, but for the moment the men with purple finger nails are still hard at work.

If you would like to see this amazing process in person join us in January for our tour: Cochineal, Indigo and Purpura. A Dyer’s Journey