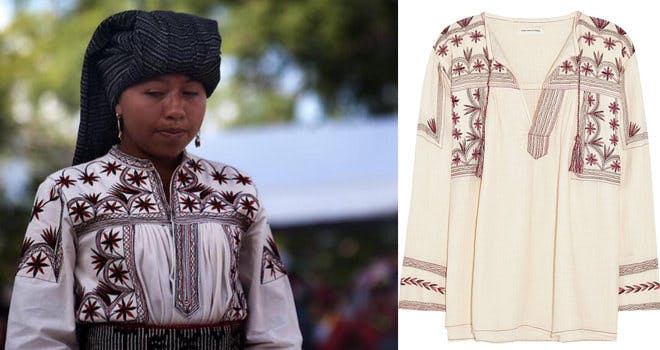 Lately, there has been an outcry on social media over the numerous cases of plagiarism that have come to light. I am not talking about our distinguished Mexican President’s dissertation (although it is quite a coincidence), but about the many well-established companies that are appropriating indigenous traditional designs to commercialise them at a very high price after having done very few changes. Even brands that pride themselves on their ethical and social values have done so. This is plagiarism and, at the end of the day, a theft. And in the case of unbalanced power relations between the predominant and the indigenous cultures we could also brand it a plunder.

These are some examples: Pottery Barn, Hermes or Mara Hoffman – among others – have industrially reproduced, often in China, the colourful Otomí embroidery to have it printed on bikinis, scarves and similar garments. French ‘designer’ Isabel Marant added a few inches of fabric to blouses from Santa María Tlahuiteltpec and sold them as her own original designs. It was only when the brand Antik Batik, also French, sued her for having copied ‘their’ designs that she had to publicly admit that the original design was from Tlahuitoltepec. (Village authorities have refused to take legal action and demanded only an apology, to which Marant has refused). Very recently, the Argentinian brand Rapsodia started selling blouses from San Antonio Castillo Velasco, Oaxaca. Huicholes and Tarahumaras have seen their iconography and designs copied over and over again, being the Nike trainers one the most notable examples. Beyond the Mexican borders, in Colombia several companies have very cheekily copied the Wayuu backpacks to mass produce them, like Spanish ‘designer’ Stella Rittwagen.

Honour for those who deserve it. We should highlight the case of Pinead Covalín, a pioneer, if not in plundering –since it’s an ancestral practise – but in justifying it as an altruist way to promote Mexican culture. Basically, a favour Mexico should thank her for. Many companies contend (apparently in their favor) that by using traditional designs on their products they are promoting and giving visibility to a certain cultural group. Under such a clearly colonialist point of view, indigenous groups – who have been resisting opression for centuries – would be so thrilled to be part of the dominant culture that they would consider any interaction, event theft, as a favour. Well, thanks for your help, pal.

In most cases, the indigenous community in question is not even given credit for the original piece. In other cases, their name is used but only to name the product or collection, thus reducing their entire cultural universe to a commercial brand. Researcher Carlos Arturo Martínez Negrete has compiled 1,600 plagiarised products in Mexico. This proves that we are not talking about isolated cases, but about a defined production strategy. A globalised robbery that generates huge and fast profits at any cost. It is about cheapening processes and profiting from the increasing interest of first-world consumers in ancestral cultures (or better said, aesthetics). It is a strategy that affects any kind of production, not only craftsmanship. A craze to amass fortune limitlessly that seems to have possessed the minds of those most powerful, just like the most dangerous virus.

We, as designers, have to be aware of this situation. The examples above are very obvious because they are ruthless. However, appropriation can be very subtle and disguised as an ethical or social project.

There are more and more designers that want to ‘help’ artisans. Sometimes because they are fed up with the common designer’s role; sometimes because of a genuine desired to help; or just because they are looking for new market opportunities. They go to a traditional village with excess of enthusiasm and lack of self-criticism, and try to teach locals how to improve their products to increase sales. This is often motivated by the prospect of personal, communicational or financial profits as a result of their being marketed as ‘conscious designers’.

But when artisans are seen as people in need of help, lacking something (and therefore inferior), they are also quickly turned into a resource. Here you can read more about the idea of the artisan as a resource – a somewhat long article I wrote a couple of years ago.

Plagiarism is serious and sad for different reasons. Among other, because already-profitable companies get richer at the expense of the cultural achievements of groups who are systematically marginalised and do not have the same access to markets. They make the most of a power imbalance and rebrand their plagiarism as inspiration. But it is also sad because they miss the opportunity to learn, create and grow. Plagiarism in the design world fails to improve our culture and increase its value through inventiveness. Instead of using an interest in indigenous cultures to learn from them, create something unique and share ideas, designers turn to a disgraceful practise that has negative consequences on both sides. Are these brands’ capacity and creativity really so poor that they cannot come up with new ways to combine colours and shapes without turning to plagiarism? Couldn’t they invest resources in creating new iconographies, new names, new stories?