A Perfect Red: The Tale of a Dye 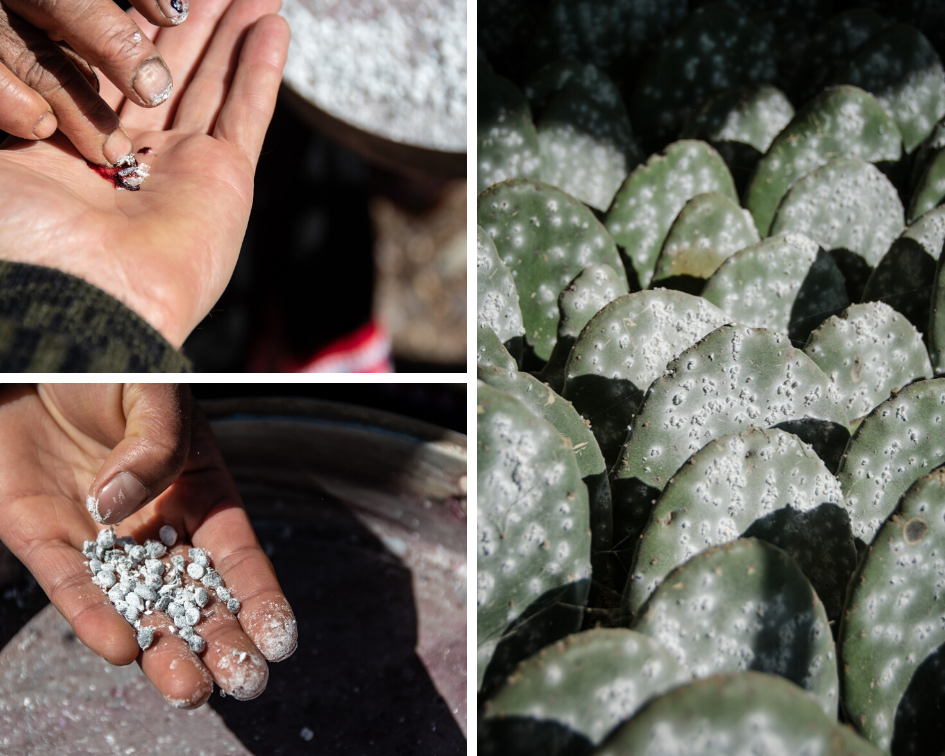 Left in the sun to dry, it is about the size of a shrivelled split pea, purple-black in colour with furrowed wrinkles across the back that are filled with a remnant of white dust. Alive and in full parasitic glory it is twice that size, like a little blimp covered in powdered sugar with a syringe-like snout that sucks the life-juice out of the innocent prickly pear it has infested.

What is this bizarre creature? Hint: if you gather 150,000 of them, give or take a few, you will have a kilo of a natural red dye as good as it gets. The answer, if you haven’t already hit on it, is cochineal.

A while back I was honoured to spend a day hanging out with Amy Butler Greenfield and these little creatures in Oaxaca, Mexico. Supposedly I was guiding Amy, but given the fact that she’s spent years researching the history, legends and intrigue that surround this little creature and the alluring colour red, I was simply along for the ride with my ears wide open while Amy told me amazing cochineal stories.

Amy came to Oaxaca to finally meet cochineal face to face and in its homeland. She was finishing up work on her book, A PERFECT RED: A True Story of Empire, Espionage, and the Color of Desire. Among her tales, she told me that meaning is attached to colours in all cultures, but only one colour crosses almost all cultural lines with its associated meanings, and that colour is red. Some of red’s associations are passion, anger and danger. She said that the gorgeous colonial buildings that make Oaxaca such a beautiful city were almost all built on the wealth created by the cochineal trade during the 300 years when these bugs were the second most lucrative export out of New Spain, or Mexico. Oaxaca produced hundreds of tons annually, peaking at almost 800 tons a year in the late 1700s. You do the math to figure out how many bugs that would have been. (The first most lucrative export was gold and silver). 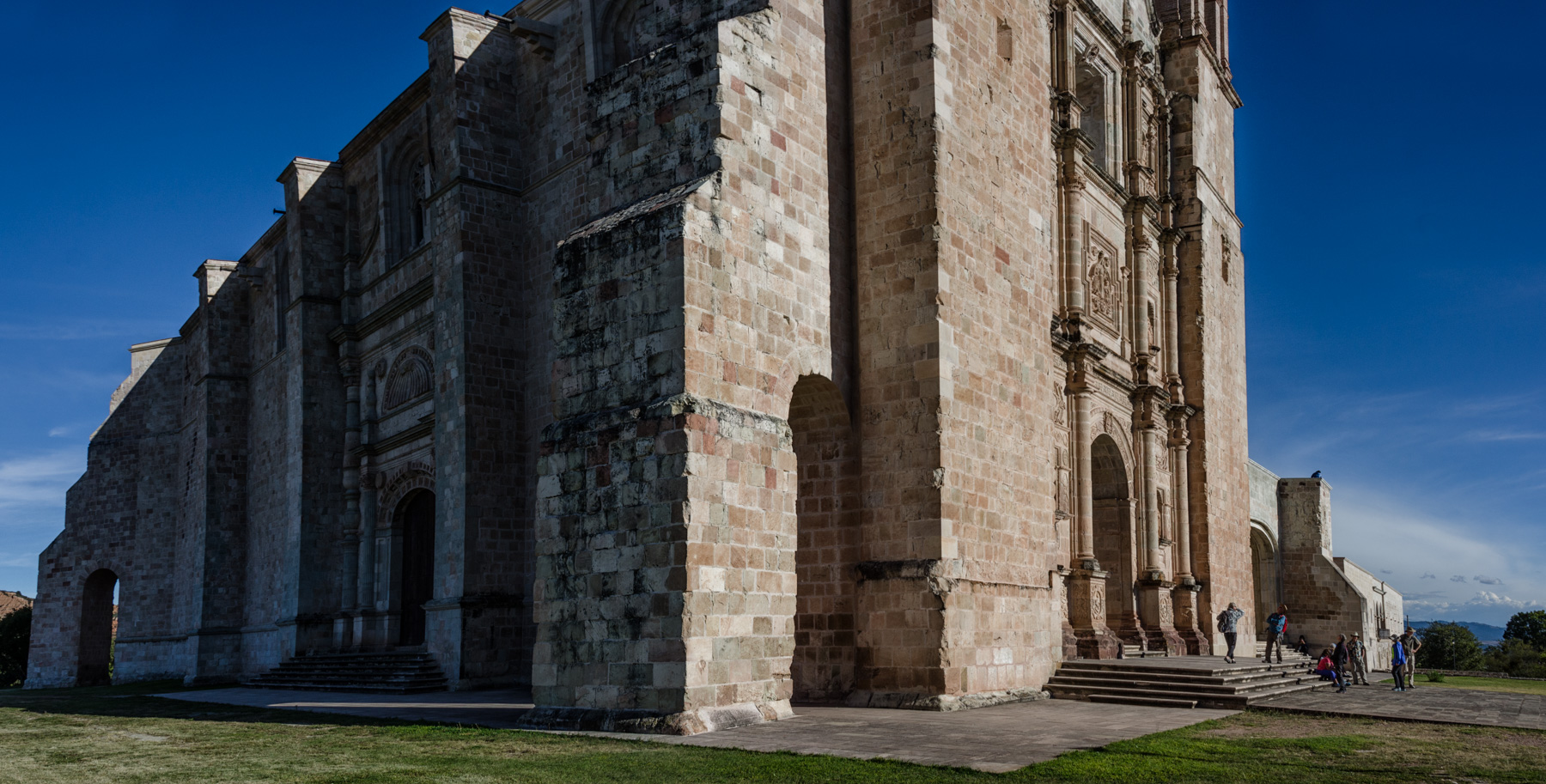 wealth from cochineal funded much of the construction of the Yanhuitlan church. Oaxaca, Mexico

But though cochineal was first cultivated and used in southern Mexico, its glory days here have long since passed. We visited an experimental cochineal farm called Tlapanochestli outside of Oaxaca city, which is one of a tiny handful of places left in Mexico that produce cochineal (Peru is now the king of cochineal production, but that’s another story). Here we saw rows of prickly pears covered with the powder-sugared peas of cochineal (just the females—the males are skinny little flies that are born, hurry up and breed then die in a matter of days) and I learned that cochineal (a.k.a. carmine) provided the red colour in a hotdog I’d eaten earlier that week. Probably the only thing worth eating in that hotdog. 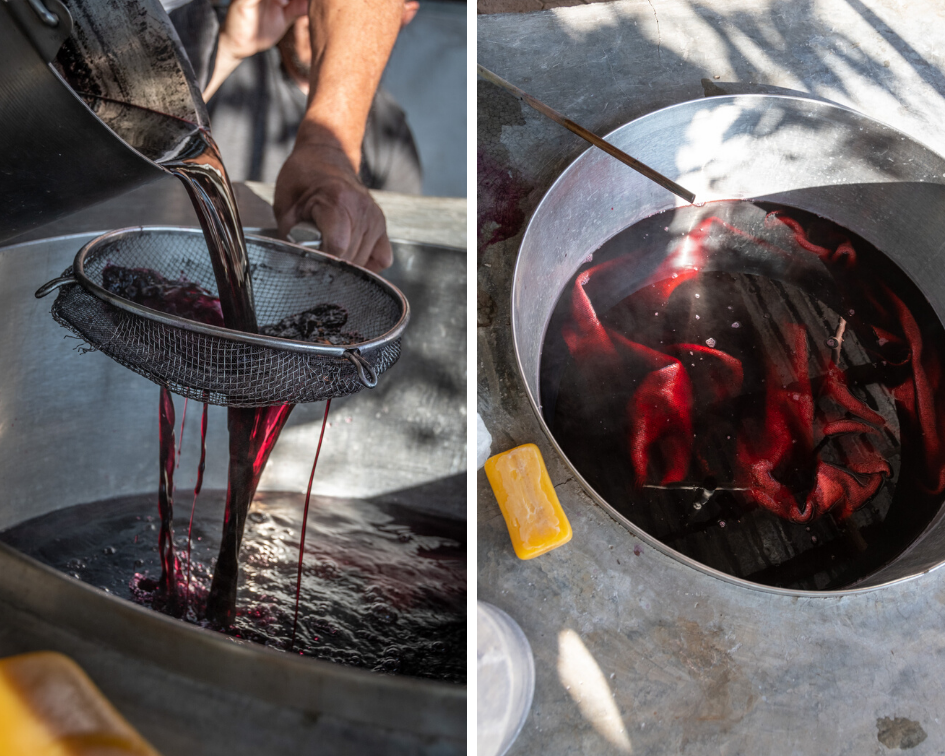 We also went to the weaver’s paradise village of Teotitlan del Valle where on any given day there are 5,000 Zapotec weavers at work making spectacular wool tapestries. We went to the home of Fidel Cruz, one of the few weavers in town who is a master cochineal dyer, and watched him do his stuff. While his wife, Maria Luisa, ground a hefty handful of dried cochineal into a rich maroon powder on a stone metate or mortar, Fidel heated water and prepared several skeins of wool for dyeing. Then they went to work adding huizache (acacia farnesiana) and limes to the red cochineal bath. Timing and amounts seemed crucial, yet there was no clock or scale, it was all done by touch and sense. He added alum to fix and intensify and an hour after they had begun he showed us skeins of gorgeous purple (the huizache being a darkener, the limes giving the duller tone produced by the huizache and brightness, and the cochineal, of course, adding the soul of it all).

Throughout it all Amy wove stories of red, cochineal and the way this little bug moved history. Who would have thought?!

This article by our founder Eric Mindling was originally featured in Garland Magazine,  a platform for thoughtful writing about beautiful objects.