A Farewell to Teresa 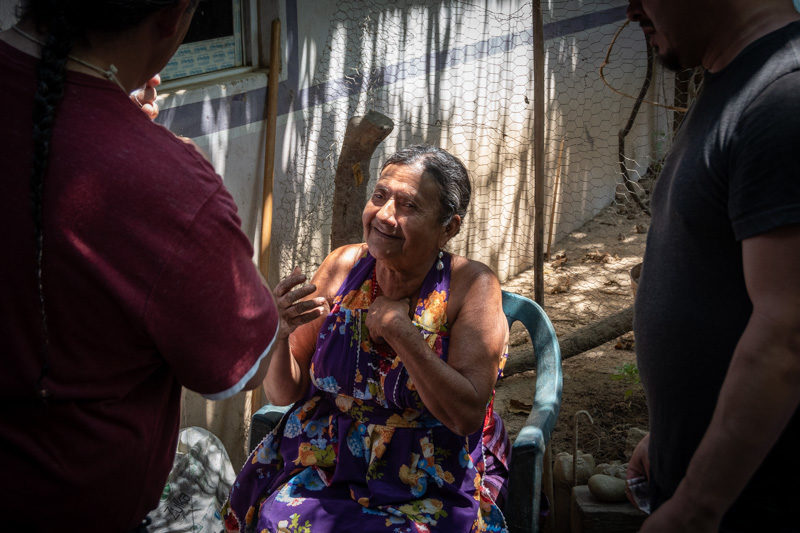 March 2019, our last visit with Teresita

We come and we go, that’s the nature of this game. Each side of that journey, coming into and going out of this life, is a big deal. And so is what happens in between. It’s everything we’ve got. The leaving tends to be the hardest, at least for those of us who are still here.

On Sept 12, Teresa Avendaño, a bright point of energy in the constellation of Oaxaca’s weavers, turned her light off for the last time.  I want to wish her a heartfelt farewell and offer her my true gratitude for the moments of her life she shared with me and the gifts her presence has brought to my living.

Teresa, more tenderly and more commonly known as Teresita, lived her life from one side of the journey to the other in the legendary Mixtec weaving village of Pinotepa de Don Luis on the coast of Oaxaca. She was a weaver and a very gregarious textile merchant who still had a foot in the old trade ways of the Mixtec people.

She was born before roads and trucks and buses were common in this part of Mexico. She was born into an ancient system of trade that predated the industrial and money-based world. It was a time when a certain class of people in Pinotepa de Don Luis traded their specialty items, which included panela brown sugar and the specialized, sarong-like woven skirts made by the women in the village for goods from other villages in their mountainous region. It was a time when textiles were currency and Teresita was in the middle of that business. She traded with the highland women of San Mateo Penasco for their red-dyed, hand-raised and spun, silk thread each year when they migrated down to the big coastal Easter fair in Huaxpaltepec. She walked days to trade with the women in the extremely remote, fabulously traditional village of Santiago Ixtayutla for their finely woven, “bleeding” huipil dresses.

As times changed and roads replaced pathways, machine-made replaced hand-made, nylon replaced hand-spun cotton and adventurous travelers found their way to beach towns that were once only the homes of fishermen, she continued her trading. She learned that some of these travelers also liked the commerce of textiles. The trade was no longer local goods for local goods, but a new economy of textiles for cash.  Teresita adapted the old trade ways to this newly arriving world. 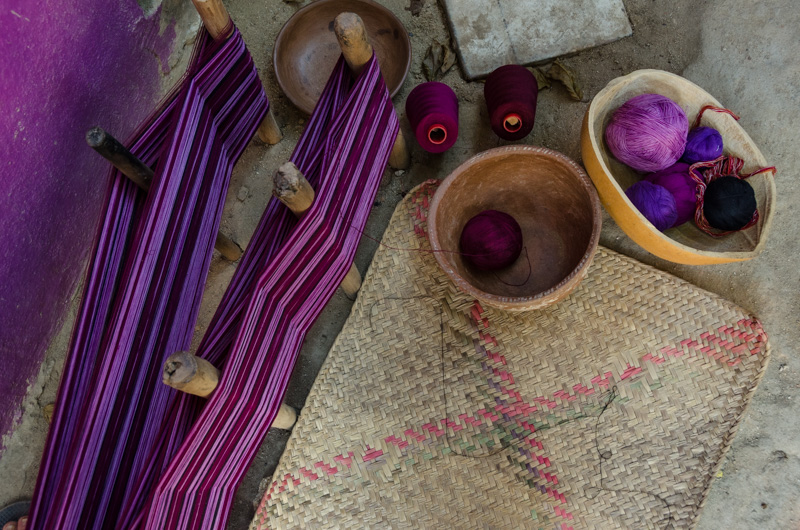 I first met her one morning in the late 1990’s as I walked up the main street of Don Luis under the shade of my straw hat. A friend had given me her name, which I held on a scrap of paper.   In my budding knowledge of textiles and cool traditions in Oaxaca I’d been hearing about the coastal villages in the far, far corner of Oaxaca. I wanted to learn more and I daydreamed about someday bringing textile travelers to this nearly unknown corner of Oaxaca.

Teresita was the leader of a group of weavers in the village and it was my fortune to cross paths with her. She was all charisma and business. She invited me into the patio of her sun-dappled workspace and our conversation began. Welcome to the world of Teresita Avendaño! It was a conversation that continued through the seasons until the last season of her life arrived. Year in and year out I’d travel to the coast, for I made the dream of bringing textile travelers to this corner of Oaxaca come true. Tere was always gleefully part of those visits.

And it was Tere, who casually mentioned to me during our first conversation, that her brother, Habacuc, dyed cotton purple with shellfish. If meeting wonderful weavers in a traditional village where they wove what they wore was wildly wonderful, to learn of the existence of the mythical shell dyers was unbelievable. I went to meet Habacuc as well, approaching him as if I was approaching Poseidon, so mythical in my mind was this trade and its practitioners.  He was humble, gentle and welcoming, and as with Tere, Habacuc, and the extended family, have since become lifelong friends.

Tere opened many doors for me. I was not alone in this. She mattered in so many lives.

Hundreds and hundreds of people where present for the rituals of her departure. There was music, mass, the right kind of food, prayer, flowers, incense burned in earthen burners and women dressed in the adornments of Pinotepa de Don Luis, this cloth of identity and commerce. Teresita was buried in a fine wooden coffin that was then covered with a petate, a woven palm sleeping mat. This was a perfect symbol of the times she spanned, for in the era in which she was born, that time when people traveled only via food-worn trails, when one passed on from this life they were put to rest wrapped in a petate. And in these current times, the time of her departure, the coffin has become the way to travel onward. She was wrapped in both in death, just as in life she was wrapped in both the rich world of ancient ways and the changing world of the new times.

Teresita, you who has travelled so many different pathways, I know you will travel well down this new one and you will thrive and smile and negotiate with skill and joy wherever you are. Meanwhile, here on the warm earth of Oaxaca, where cloth and memory intertwine,  you will be missed.

Teresita Avendaño is laid to rest.