A Circle of Alpaca

We arrived in the village wrapped in our culture. Our clothing came from the online outlet, the department store, the second hand store, the travel specialty store. We had the “right stuff” because we could and because, well, shouldn’t we? Going traveling far away to an unknown place one should have the right kind of hat, the UV protective sleeves, the proper rehydration flask, the secret pocket for the money, the light, non wrinkle pants, the stuffable down vest and windbreaker and the sensible walking shoes. Isn’t this so? 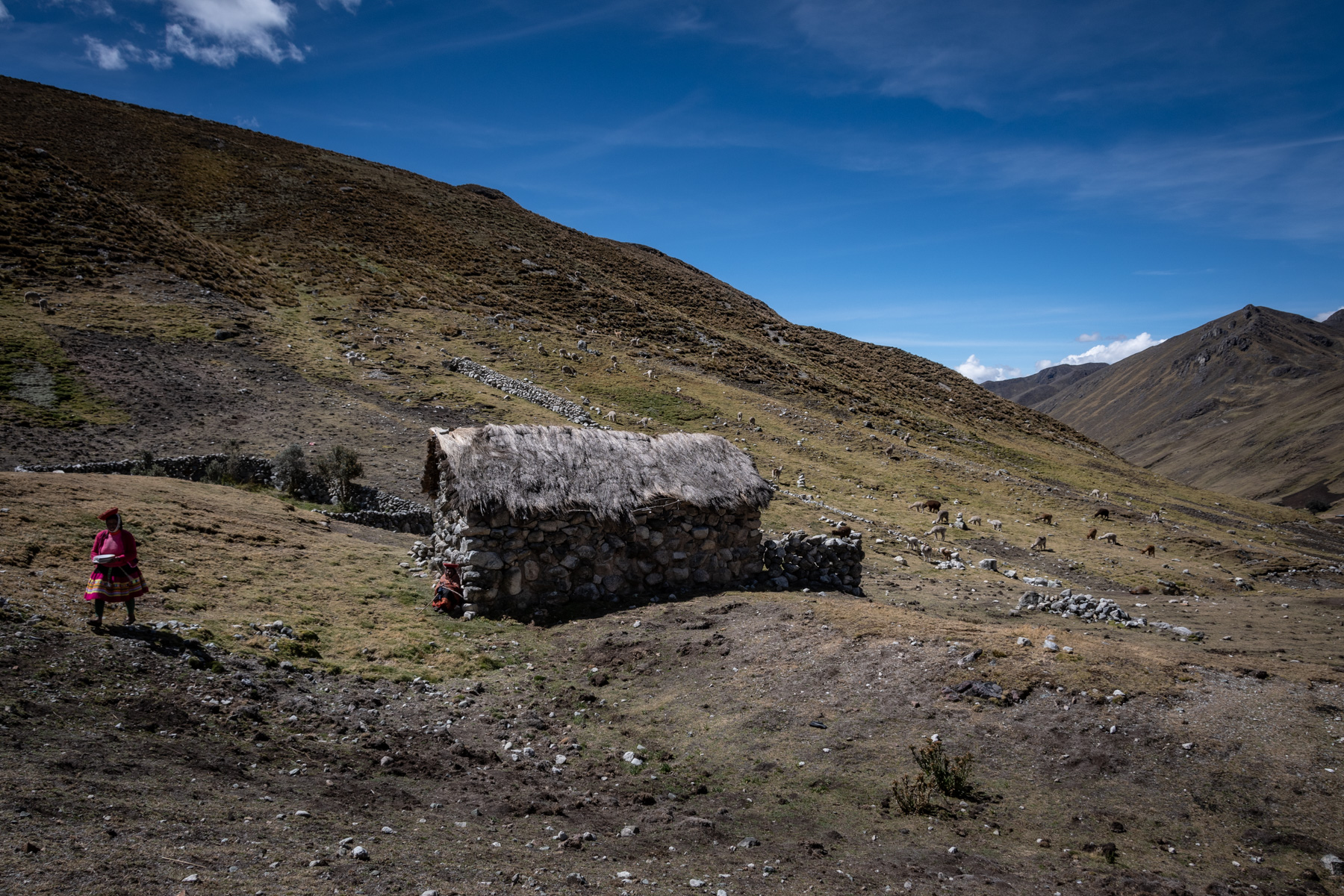 The people of the village greeted us with bright smiles and flowers, but were unimpressed by our regalia as we stumbled out of the van. So they wrapped us in theirs. They tied handmade skirts around the waists of the women and pulled carefully woven blouses over their heads. They topped them with a certain hat with a wide beaded neck strap that spoke of this place on earth. They made the men beautiful with bright serapes and short brimmed felt hats adorned with colors and ribbons and laughed and whispered around us in Quechua the entire time.  It took five minutes and we had metamorphosed from beings presenting to the world fabric of foreign factories and meaningless commercial brand names to hand-made, here-made with only one brand, singing loud and saying “we are of this place and people”. 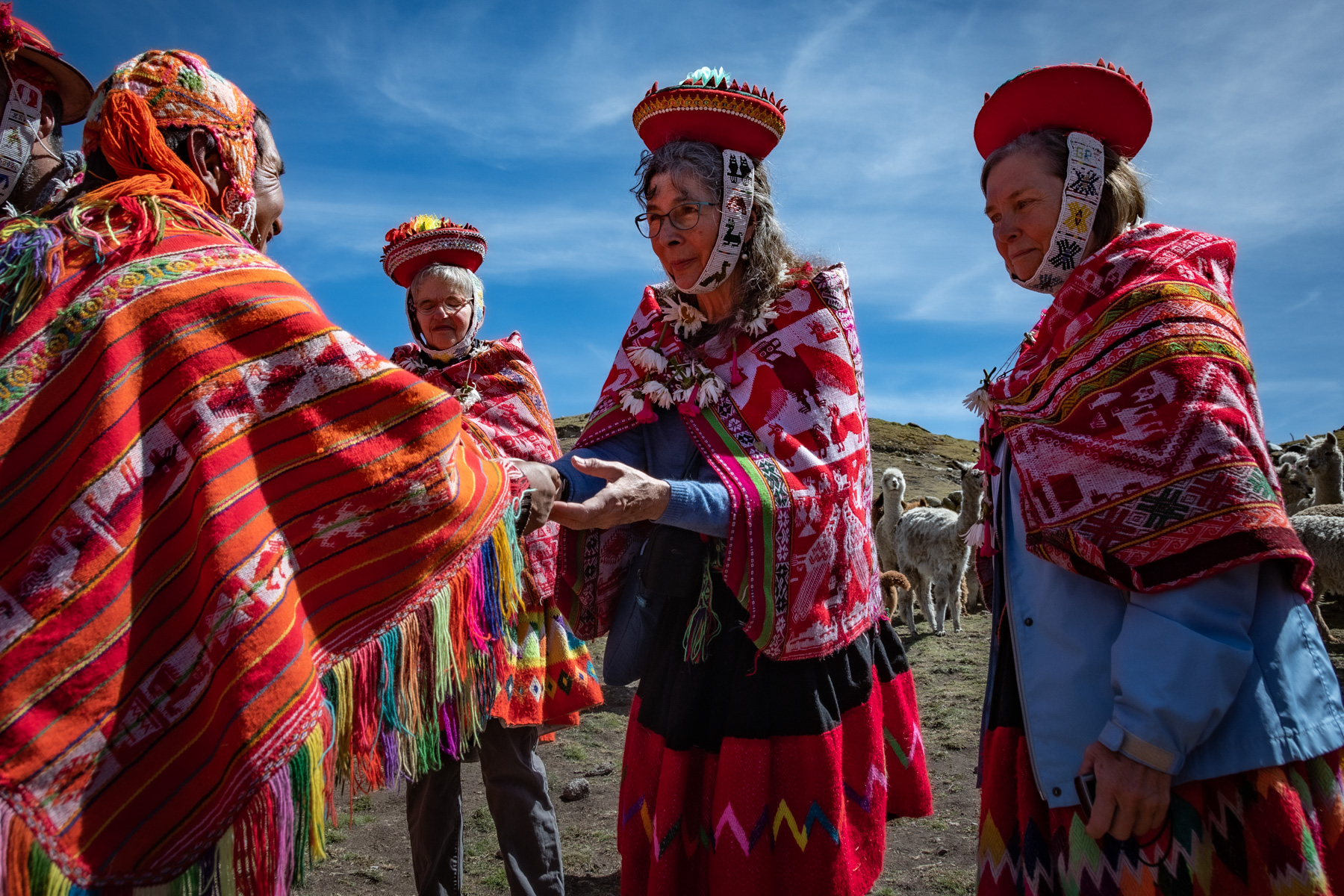 I have little doubt the eyes of the mountains and heavens felt pleased by our colorful, floral, collectively rhyming  appearance. And I know the eyes of the villagers smiled. We had become part of their circle.

And so began what was one of the most incredible and moving cultural encounters I’ve ever had as a traveler.

Here is the setting: A high…very high, and beautifully desolate valley somewhere in the Andes of Peru. Over there rugged peaks caked with glaciers. And there, a lagoon of crystal mountain water with alpaca grazing around its mossy edges. We have travelled up long valleys carved by ice age glaciers, passed small farms made of stone and grass to get to this place; a village of a dozen houses, also made of stone and grass. A village made of what the earth here has to offer settled by people making a living of what this same land has to offer. Here, above 12,000 feet, it is not a plethora. Potatoes grow. Alpaca graze. Trout feed in the creek. This is what you have.

And you are grateful, for it shelters, feeds, clothes and holds you. And that gratitude is expressed.

Having been transformed into the dress of this place, we could not help but to begin to feel more part of it. And the next thing we knew we were being swept along, across the open land, past the stone houses to a place where women and dogs were herding together a hundred white and brown, very fluffy, alpaca. They looked a little like muppets, and were coerced into a circular, stone corral. 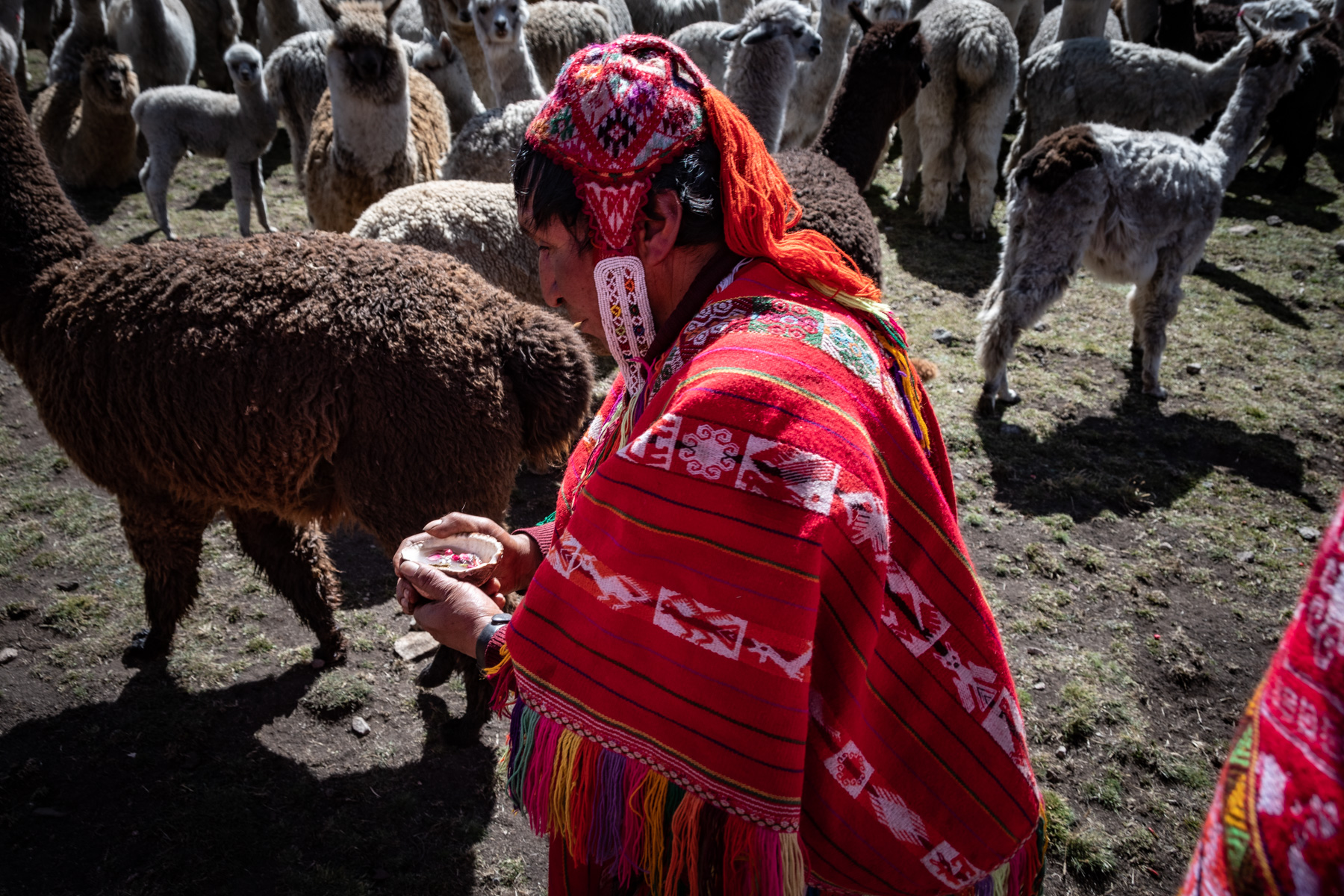 Everyone was abuzz, women came running down the slopes carrying flowers, clay jugs, cloths, an old shovel filled with smoking embers. Three men materialized with ancient drums and a cane flute, playing a strange, repetitive tune that could only be the echo of the voice of centuries. Then the women began to dance with the musicians in a circle within the stone circle, their babies slung over their backs in handwoven shawls, singing a high pitched song to the old whistle and rat tat tat.

We had no idea what was happening, it was just going on. We were there, like the alpaca, herded into this happening. Then, one by one the women came out of the dancing circle there in the corral and drew us in. And we went. We ceased to be the observers, the visitors, the tourists come to watch and photograph. We became part of the story, we were in it, dancing, contributing to this offering of movement and music, lost in the moment, dressed in the village way, forgetting ourselves and creating a small, moving circle of humanity. Thrilled, confused, eyes wide open, unexpected, beyond, oh thank goodness, our routines or habits or boredom.

It went on, the alpaca looking with either humor or bewilderment or both in their eyes.  Like us. Then suddenly the villagers huddled up and the flowers and woven cloths and clay vessels were laid out on the ground in their midst. Sacred leaves and ritual beverages appeared from the folds and containers, an ancient gourd was held to the mountains to bless, to pray, to give thanks, to request. Leaves and drink were shared around with words of blessing and gratitude. The alpaca bustled and brayed, the air was sharp and crisp, scented with smoke from ritual fires set in the four directions, our tongues flavored with the strange offerings, our energy vibrant, dazed, amazed. 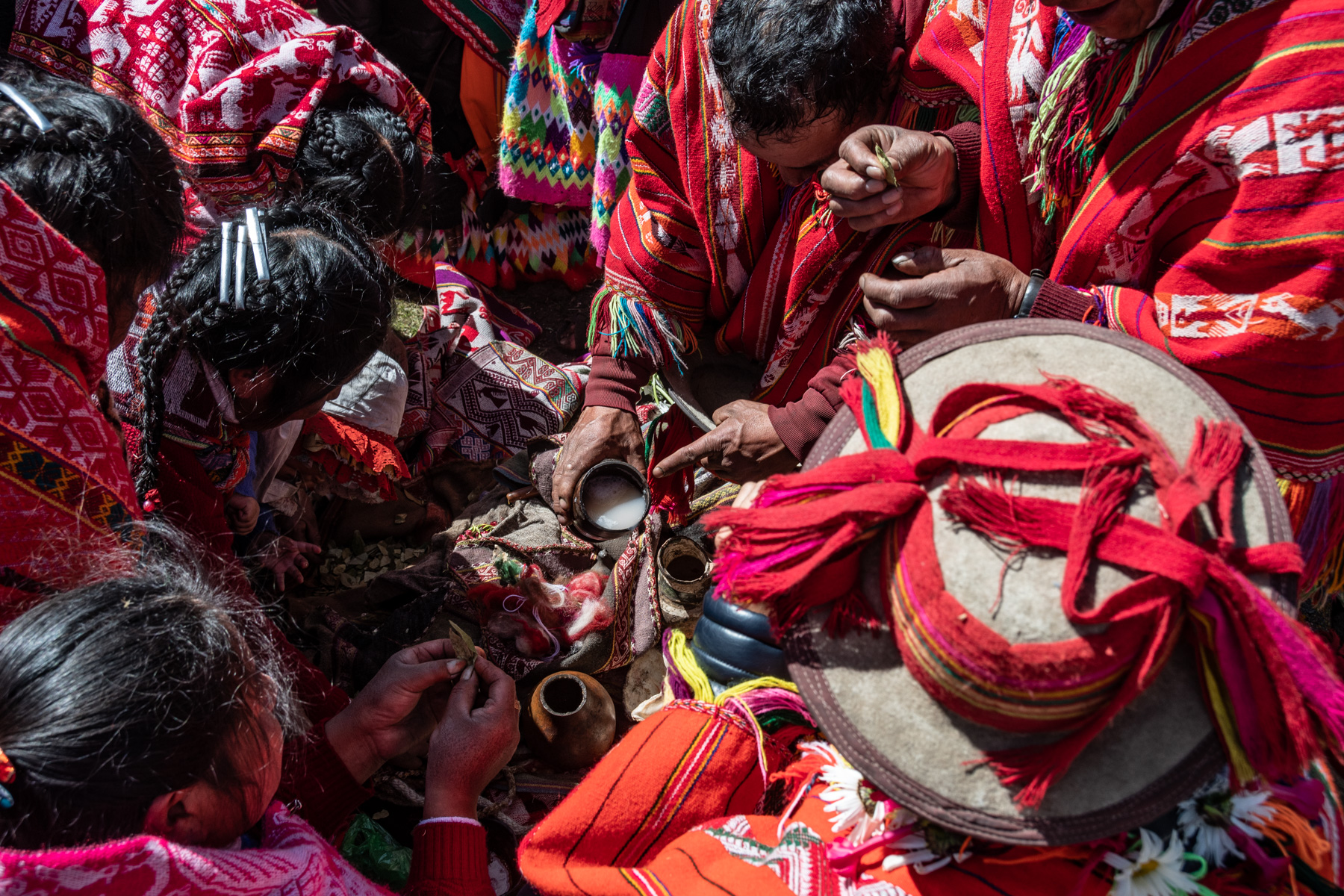 This was, we learned, a blessing of the alpaca whose wool and meat were so important to the life of these mountain people. This was a prayer for abundance and fertility. It was a gift in song and dance and offerings to the mountain-gods covered in bright snow. 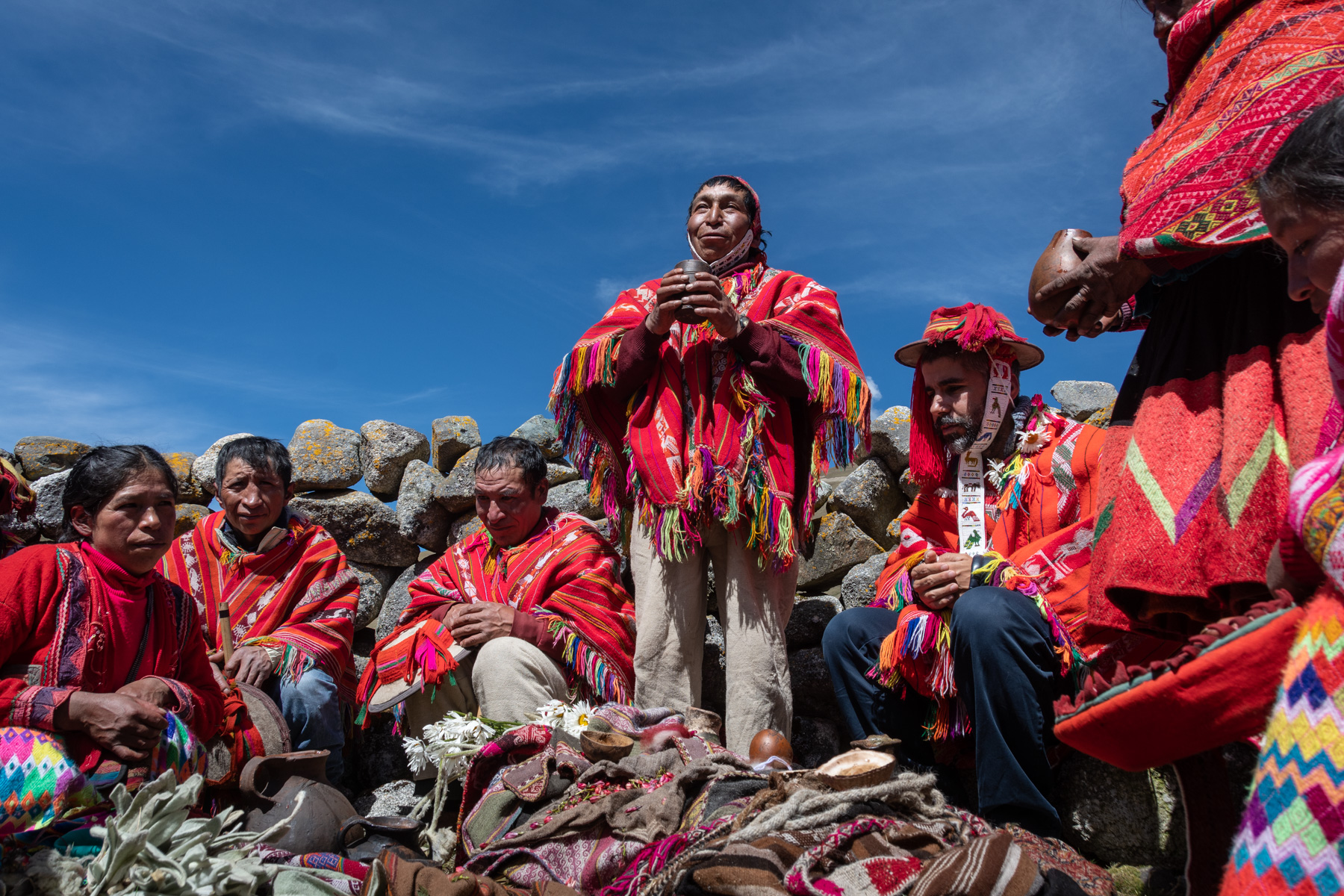 This is a village of three dozen souls. Farmers, herds people and weavers. They are neither musicians nor priests nor dancers. But they played a timeless tune, spoke reverent words from the heart and danced for the mountains to witness. Not as a show, but as an offering to something that deeply matters to them.  It was a simple ritual, simple like a home of stone and grass. All earth and element (and just a bit of fluff, in the form of the alpacas). And it was one of the most beautiful things I’ve ever been part of. Fully part of.

This is why I walk out my front door with my passport. To forget myself and find myself.